When you enter the writing world you begin to come into contact with other writers. The following are two authors who are making their impact on the publishing world and I am so incredibly happy for them – and a tad jealous 😉

I am pretty sure I have written at some point about Donna Hoise. She is a successful independent author who writes the wonderful Camelot Series. This coming August 1st she is releasing her first book through a publisher “The Devil’s Intern”! 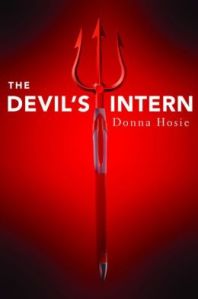 (Overview from BN.com)
“How did you die?”

It’s the most popular question in Hell, and Mitchell Johnson has been answering it ever since he was hit by a bus at age seventeen and inexplicably ended up in the Underworld. Now Mitchell is The Devil’s intern in Hell’s accounting office. Lately, he’s noticed a disturbing trend: the volume of new arrivals is straining Hell’s limited resources. Then Mitchell overhears his boss discussing plans to limit newcomers with a legendary time travel mechanism. With a device like that, Mitchell realizes, he could change history and prevent his own death.

Mitchell’s plot goes awry when his three closest friends—Alfarin, the Viking prince; Elinor, from 17th-century London; and Melissa, from 1960s San Francisco—insert themselves into his plans. It soon becomes clear that the fates of all four are entwined in dangerous and unpredictable ways. With unforgettable characters and a thrilling premise, this original novel is by turns funny, poignant, and thought-provoking.

I just ordered my copy at a local Barnes & Noble! Can’t wait to read it! Early reviews have been very positive.

Another friend of mine – Staci Hart – has just released the 3rd book in her Good Gods Series. This one is titled: Doe Eyes.

It is currently $0.99 as a release special price. I highly suggest you read the first two books as well before Doe Eyes: Deer in Headlights – Good Gods Volume 1 and Snake in the Grass – Volume 2. There is also a short story: What the Heart Wants.

Aphrodite knows better than anyone how the heart works. Just don’t ask her to figure out her own.

She’s been away from Olympus for weeks, which wasn’t near long enough for her to move on from everything that happened, to get past the betrayal and loss. She has no idea what she’s walking into when she gets back other than a new competition, this time against Artemis. The goddesses have never been friends, but now they have more in common than ever, though they’d rather face eat ambrosia straight than admit it.

Artemis can’t help but be smug. Her player, Josie, is a private investigator who’s lost more than she’s won. Every waking moment is consumed by her fire to catch the man who killed her partner, and when Jon comes back into town after leaving her without a word, it’s more than she can handle. She’ll never let him in. Not again.

But Jon only did what he thought was right, and he’ll do anything he can, give her everything he has to give to prove that he can be trusted with her heart again.

With Adonis gone and the threat of Ares around every corner, Aphrodite’s past presses on her, leaving her more alone than she’s ever been. She can’t help wondering if she’ll ever escape, and how much pain she’ll endure before the whole ordeal is behind her.

Another one I can’t wait to read – so far the reviews have been overwhelmingly positive.

"Perhaps travel cannot prevent bigotry, but by demonstrating that all peoples cry, laugh, eat, worry, and die, it can introduce the idea that if we try and understand each other, we may even become friends." -Maya Angelou

Follow Varzaland on WordPress.com
Welcome to the Legion!
neosalexandria

Lead from the Library
balletclassroom

Dance not for fame or glory...... but how you feel inside!

Adventures in Etymology and Language

Where Every Word Counts

A GEEK PR/Marketing Expert with a Wacky Life.

ideas are like oxygen: a journal by Carrie Vaughn

a little bit about lots of things

A place for me to discuss the books I am reading

The Book of ZOO

The mad ramblings of a chronic insomniac.

Notes & Letters to My Child... Which Will One Day Embarass Him

My First Year in The Lone Star State

"Though both are bound in the spiral dance, I would rather be a cyborg than a goddess." - Donna Haraway

Broken Fingers: Thoughts of a Writer

Writing 'til it hurts, and then writing some more...

WordPress.com is the best place for your personal blog or business site.